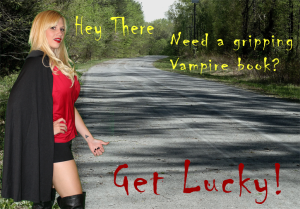 Lucky is who he is.

A monster of the night who must have blood to survive… and whose
blood tastes the sweetest to him but that of the most vile of men.  The
police don’t even bother trying to solve the strange murders.  Lucky
is doing them a favor by removing the dregs from their streets.

Lucky’s victims are torn from the pages of history.  In real life these
men were executed for their depraved and despicable crimes in the
Texas death chamber.  Men like Ronald Clark O’Bryan who, for the
insurance money, poisoned his own son on Halloween night 1974
in a posh Houston neighborhood and then delivered his eulogy in
church the following Sunday.  The names and places have been
changed, but all the facts of their merciless crimes are spelled out
before Lucky deals vengeance.

Some of Lucky’s victims killed for revenge.  Some killed for money.
Some killed for the thrill of seeing someone die.  Lucky doesn’t care.
The more vile his victim, the sweeter the blood.  And Lucky love’s
to expose the darkness in their souls as they plead for mercy, as
they realize the piper has come and it’s time to pay up.